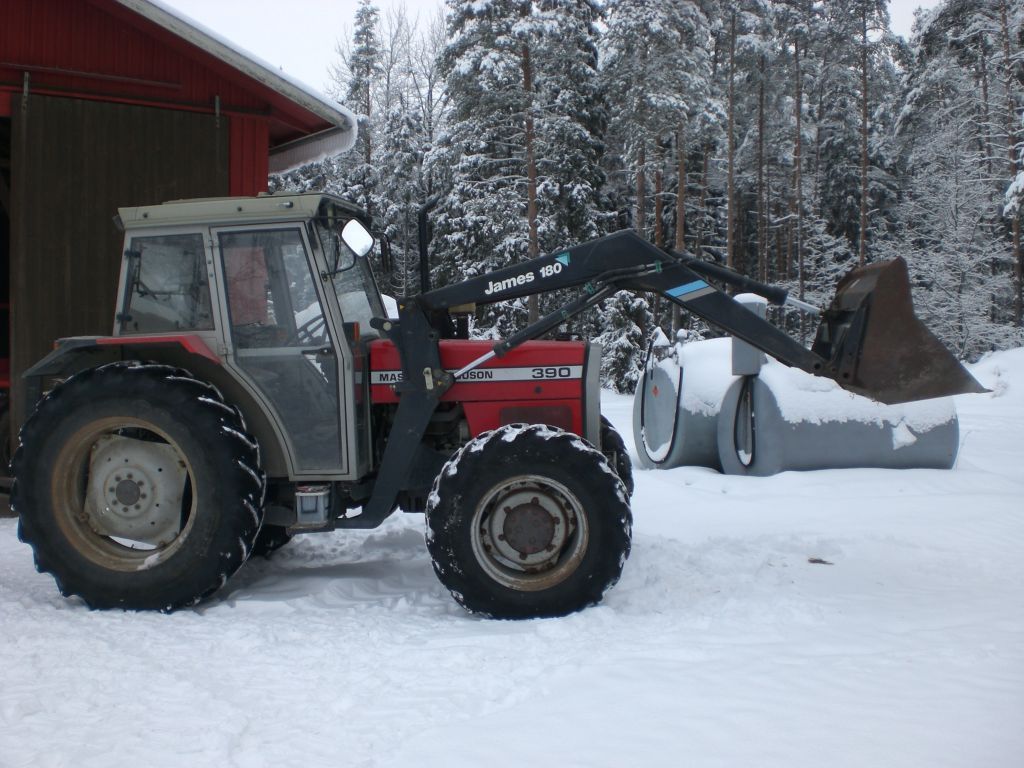 The engine-gearbox jointing is still hidden on the left side, though the frame is taken off. So I will go on clearing my way by removing wiring, fuel system pipes and other small stuff. The starter motor must be taken off too. 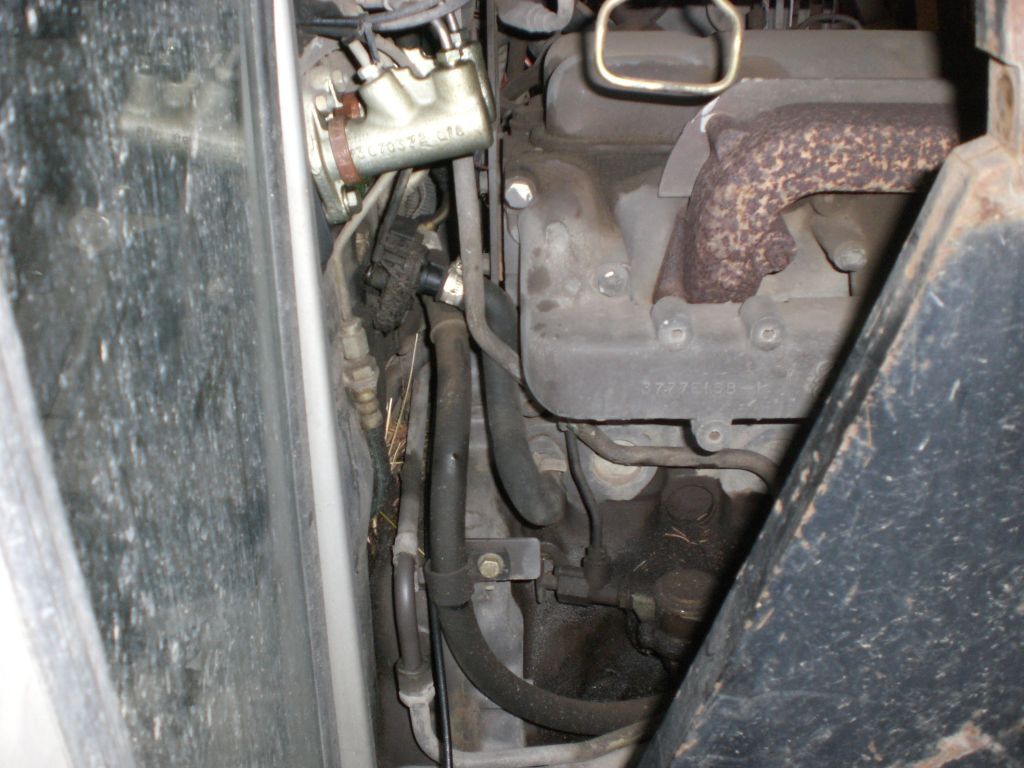 More room on the right side, although the frame is still.

The splitting was done on concrete floor using pump trolley and truck pallets under engine. There were wooden shocks between front axle and it's housing to prevent the front part of the tractor from turning over. The gearbox was lifted with hydraulic jack and supported by a log bedding. Front loader's valve table and right frame will stay mounted in the tail end. 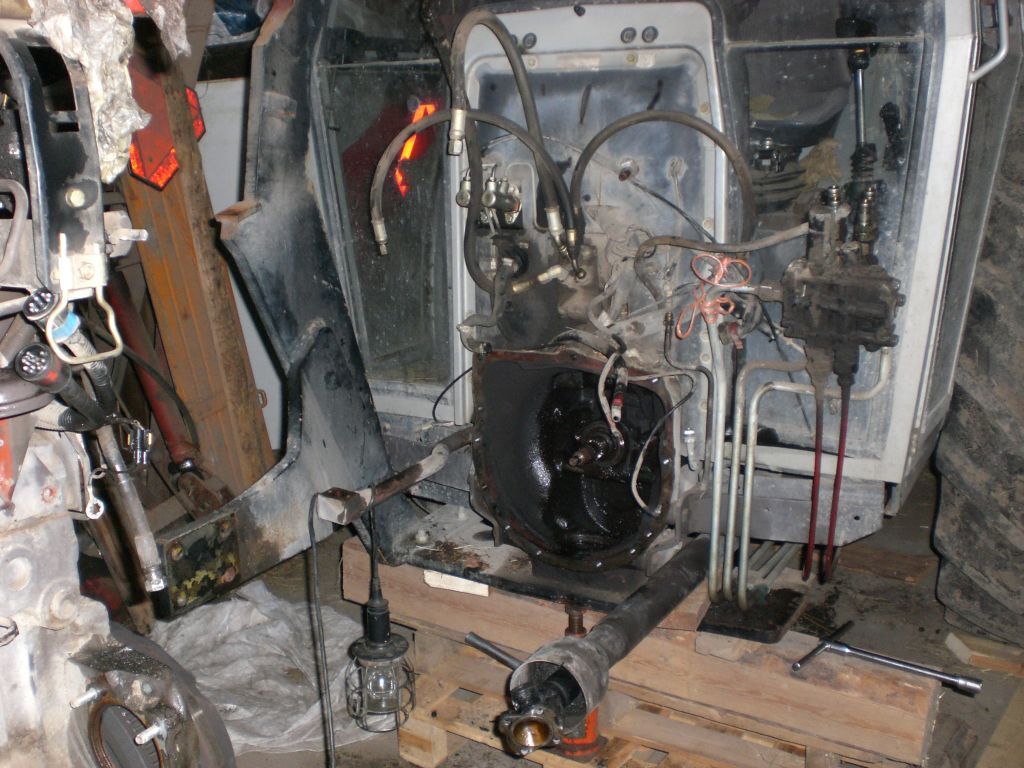 The gap between flywheel and gearbox casting is halfway full of black grime and smut, made of dust and oil. This could also lock up starter's gear wheel, that didn't always move to the teeth of the flywheel ring gear when started. 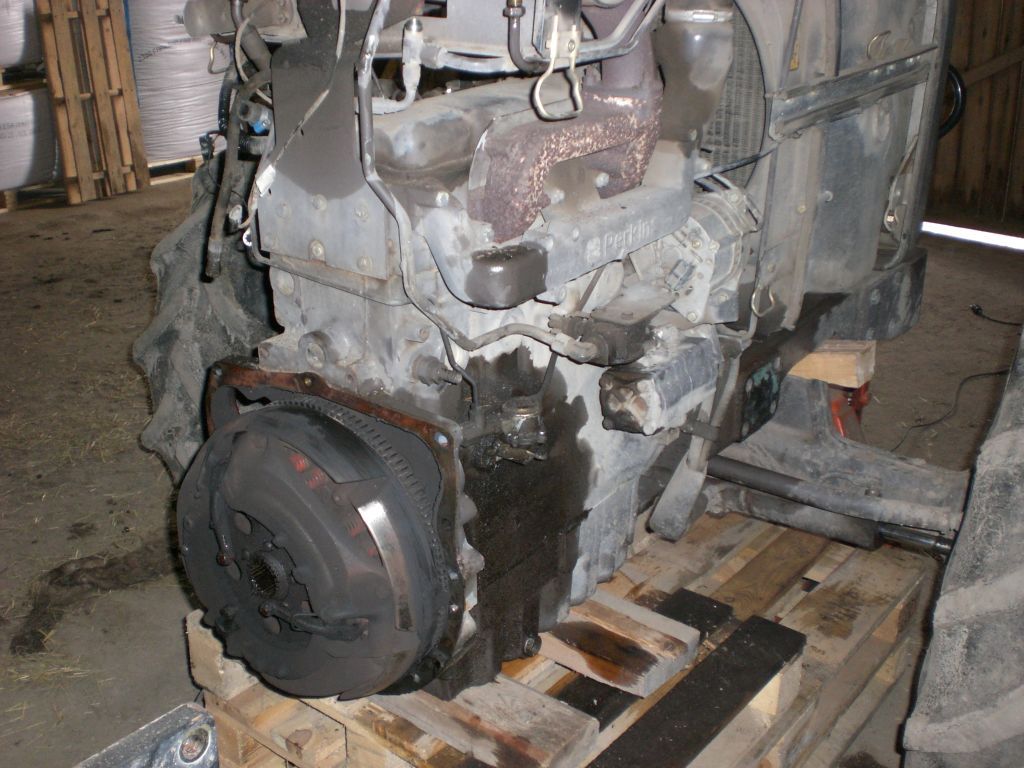 The front part and the other of two oakwood shocks, that make front axle stiff. 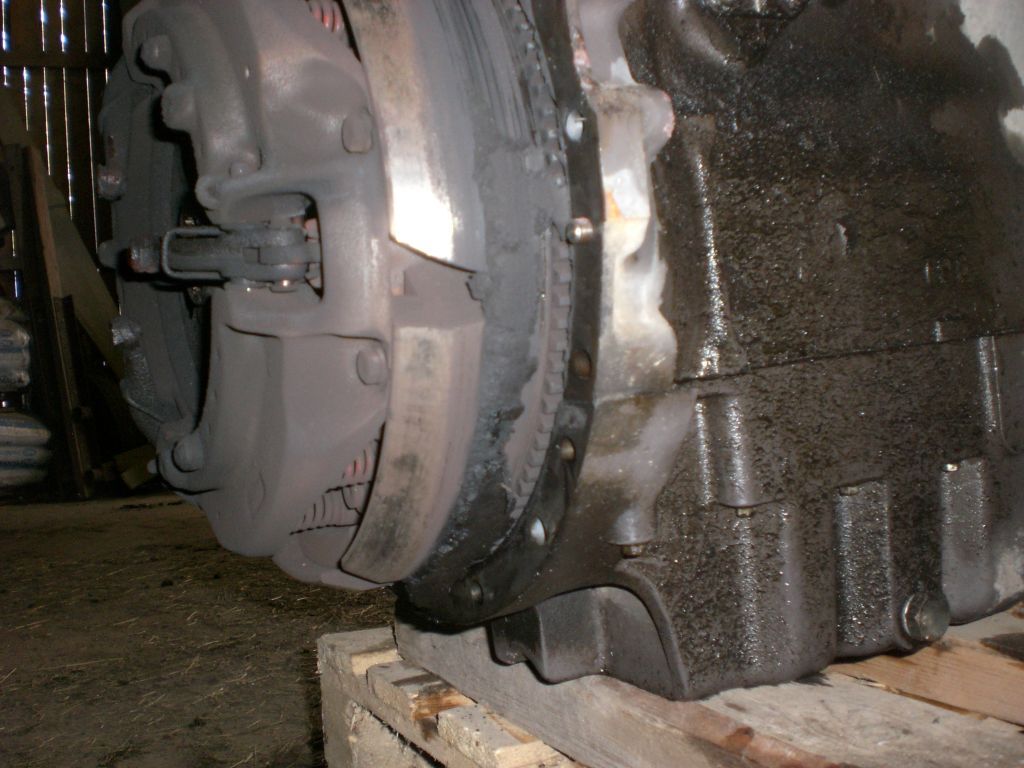 Whole lot of smut on the other side too, could slow down engine spinning at least on starting. 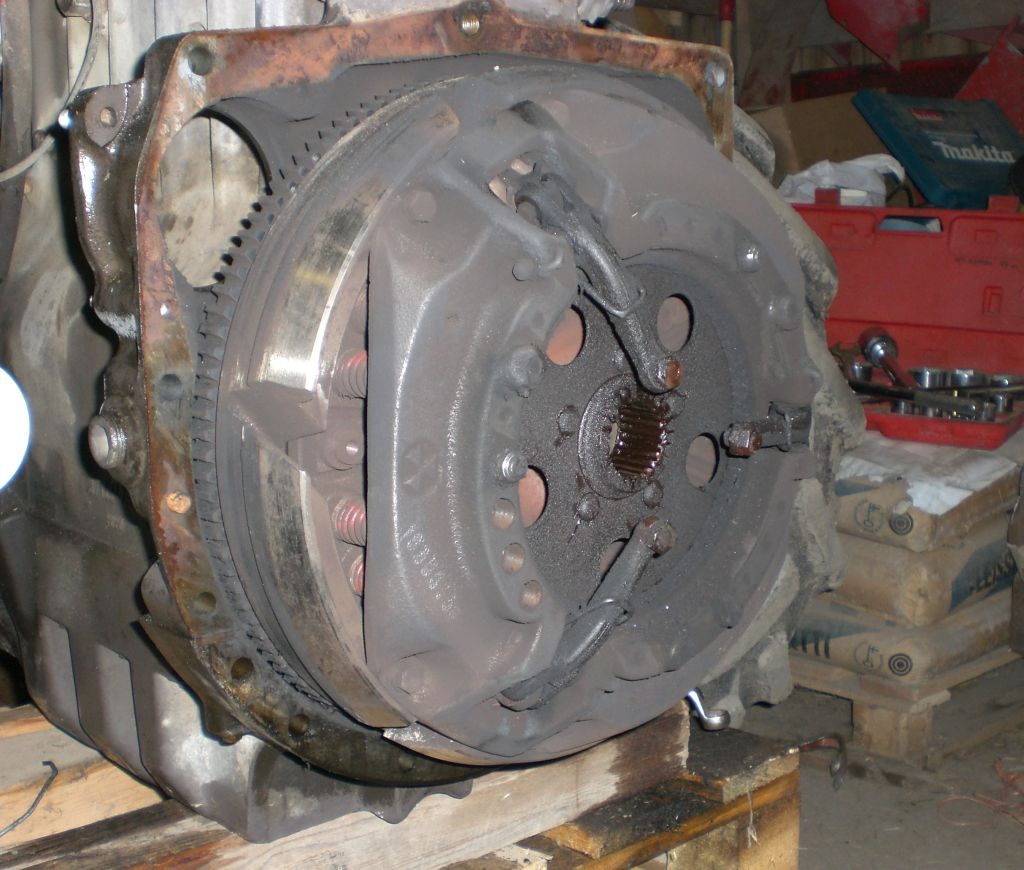 Clutch adjusting bolt's heads have worn off and partly locking nuts too. I've scraped that hard grime away.

The clutch assembly taken off. The flywheel has worn irregularly, maybe 2 mm pits on it's surface. The surface of organic clutch disc has worn off totally. The balls of small pinion shaft (drive transmission) bearing were all in one pile and the ball matrix had disappeared somewhere, only outer ring left when picture was taken.

The flywheel was taken off and delivered to a machine tooling shop for reshaping with a lathe. The crankshaft seal is changed just in case now, when it's possible. 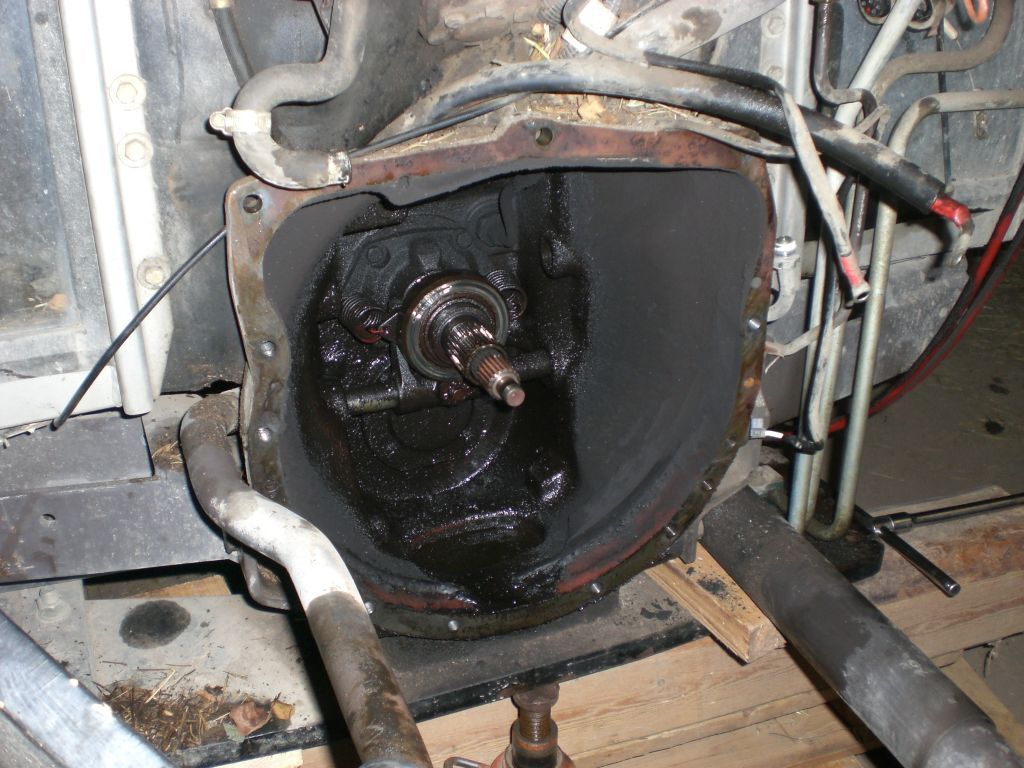 A sight to the gearbox end for a change. The suction tube on the left. 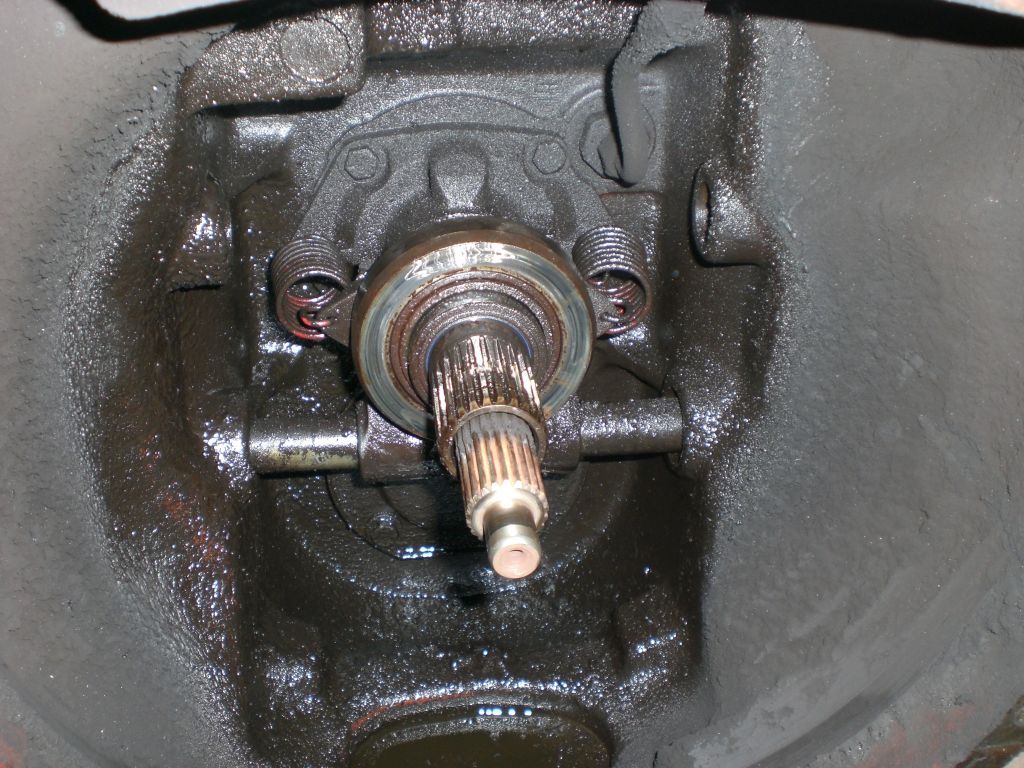 The clutch release bearing still rolls fairly well, but is replaced. I didn't change those return springs, could have been affordable. The grime inside clutch housing is caused by oil leaked between PTO hollow shaft and it's nest, so I have to replace seals and bearings as well. That low pressure hydraulic oil pipe is plugged in the gearbox, it's purpose is unknown to me.

The release bearing taken off with bowl and fork. Then the nest for clutch axles is separated from the gearbox and finally the PTO hollow shaft taken out. Nothing should drop inside, cause the drive transmission clutch shaft sits tight in gearbox.

To dismantle the fork I had to pull it's axle sideways. To do this I also had to take away the support bar for cabin. This cabin is Lo-Profile model.

The clutch disc had worn out totally. The clutch assembly had also worn unevenly. It could be machined and renovated too, but I chose to buy a new assembly. On the left is the PTO hollow shaft still in it's nest. 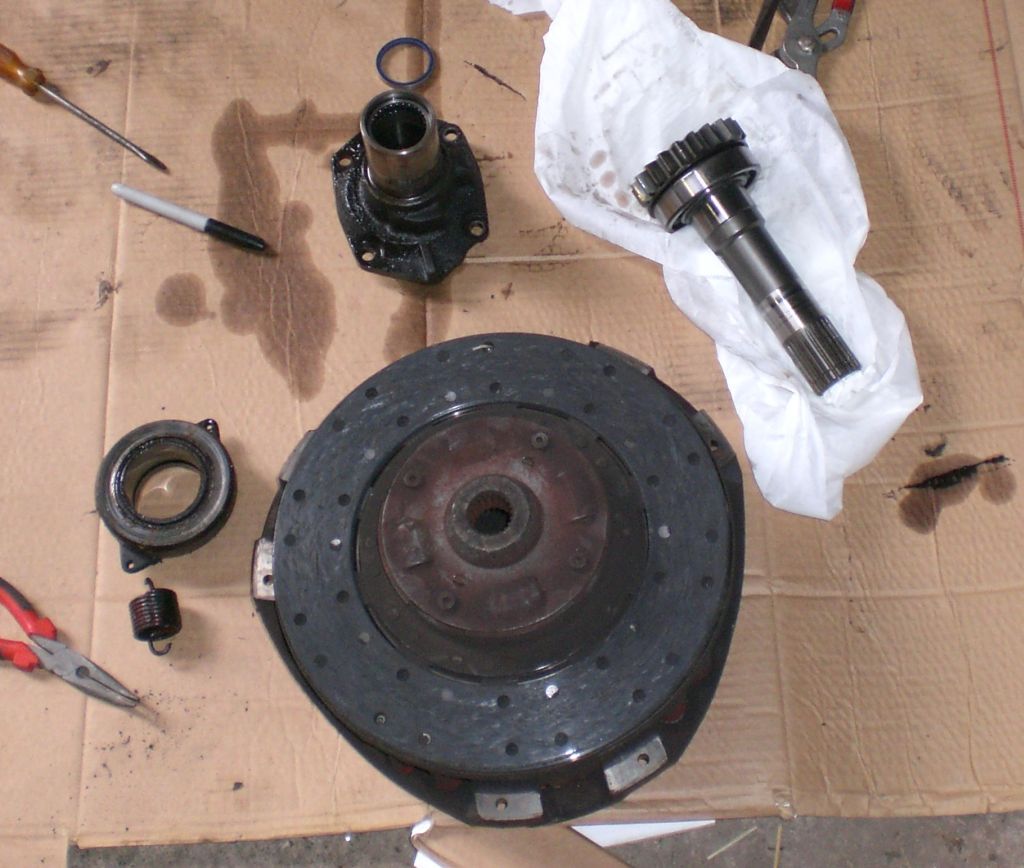 The hollow shaft taken apart. The shaft had some kind of scratch not visible in the picture, could be the reason for leaking.

Same parts, bearings pocket in the nest turned into view.

The puller for needle bearing between clutch axles. The less professional model. The bearings between shafts were changed to new ones. 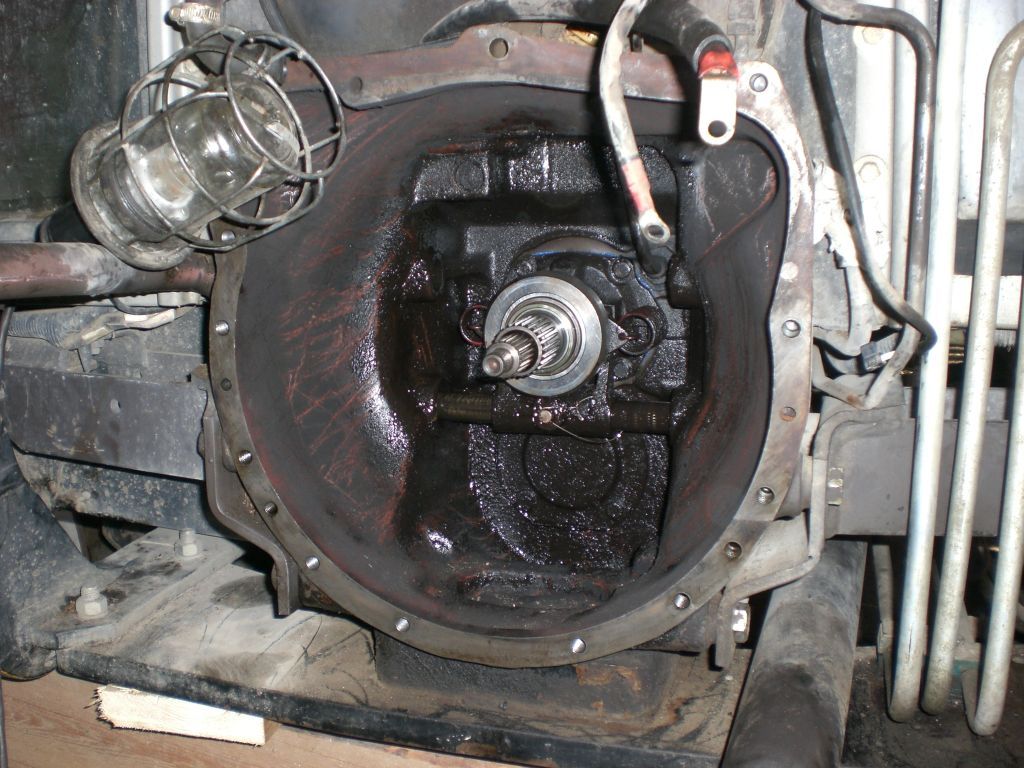 The release bearing assembly was put together again and planted to gearbox using silicone sealant. The bolts were tightened using threadlocker. The fork's bolt was secured with piano wire. 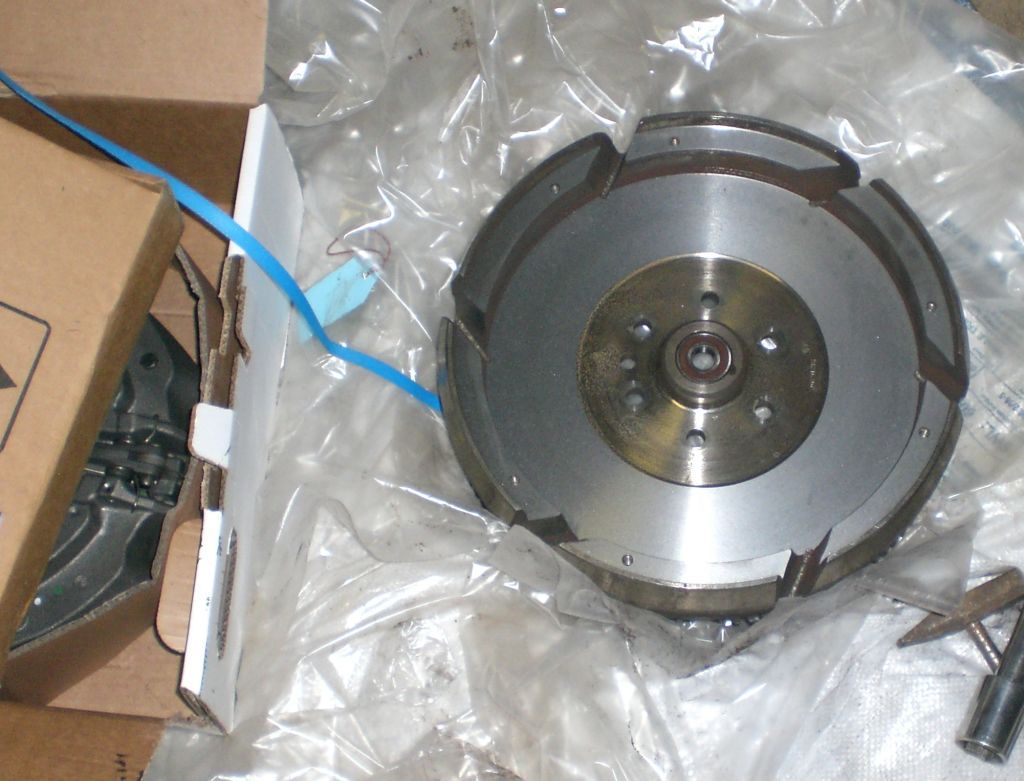 The flywheel and it's mounting surface for clutch assembly was equally machined with lathe to keep adjusting right. In addition to this the machine tooling shop also turned the flywheel ring gear 90 degrees in flywheel, cause teeth were worn on one sector. All this quality work costed 80 €. Also a new ball bearing pressed in place. 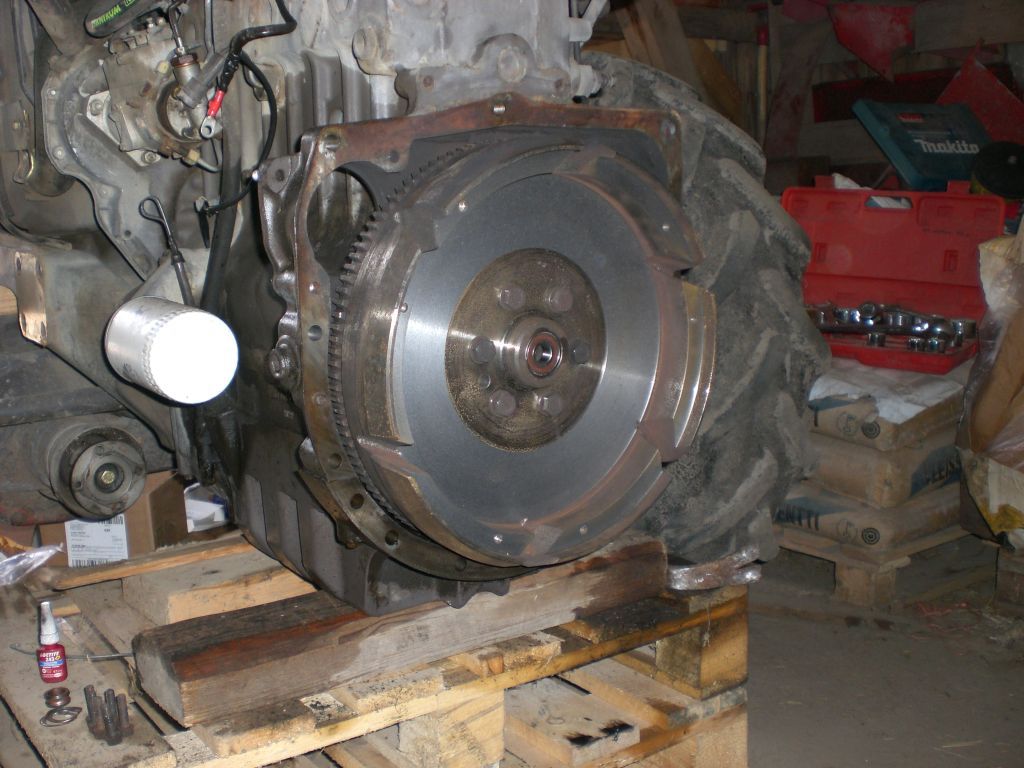 The flywheel was bolted on secured with threadlocker.

The new assembly fastened to flywheel. The clutch disc should be closely in central position in order to successfully join the front and rear ends of the tractor. Usually a machined adapter with right thickness for the bearing and disc centres is applied to concentrate the disc. I first composed together some kind of DIY adapter tool with poor results and didn't get the splines meet.

There can be seen 3 bolts usually applied to keep the assembly in a neat purchase package. They are turned off after the assembly is installed. I tightened them suitably to get the disc stay parked loosely. Then purely visually targeted the disc by levering it to focus with some rods and then twisted the bolts out. I also turned the splines of the axles to right angle. Now I managed to join the tractor by pushing the engine end with pump trolley.

The original assembly sat very tight on it's mounting surface, this new assembly didn't. Assembly's outer edges were packed with pieces of duct tape to get it more close to right place in the middle of flywheel. At this point I started to regret a bit for not renovating the original MF quality assembly. In any case the clutch have worked well several years now and don't shake. The pedal is very light to press, which made me to doubt springs in the clutch are poor, but clutch hasn't slipped either.

New starter installed, wiring and fuel piping assembled together. Then loader's left frame was fitted in place. The new hydraulics tandem pump was installed already when the tractor was splitted in two parts. 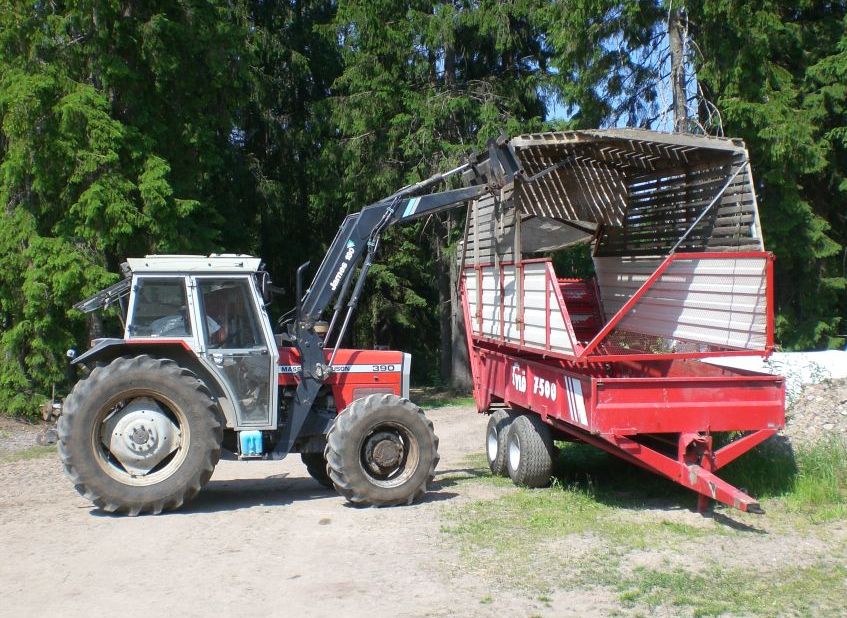 It was spring and time to get back to work, that included manure loading in 390 case. After that lifting big bags of fertilizer and seeds. Then machines were washed up and the silage cassette lifted on the Ylö multi purpose trailer.